Inline Services is excited to announce the promotion of Devin McClain to Warehouse Team Lead this month. Devin came to Inline Services in 2016 and brought with him prior experience in team leadership. He has been dedicated to learning about Inline’s business, and has demonstrated the willingness to take on additional responsibility since the day he started.

“Due to the increased activity in our warehouse, we felt adding a team leader to the group would further streamline our shipping and receiving processes.  We are thrilled that Devin accepted the challenge and feel confident he will do a fantastic job!” said Gary Smith, President of Inline Services.

The entire team at Inline Services congratulates Devin on his promotion!  We are so lucky to have him and look forward to seeing his impact in the continued success of Inline’s commitment to exemplary customer service. Way to go Devin!! 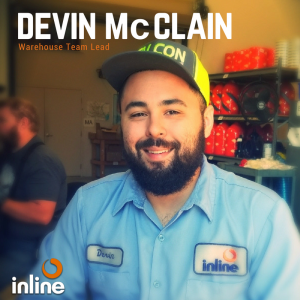