Marcus joined Inline Services in 2016 as Warehouse Manager with the goal of turning Inline’s warehouse operations into a well-oiled machine. Under his direction, Inline’s very complex shipping, receiving, fulfillment, inventory and QC processes became more efficient and effective for internal and external customers.   “Operations in the warehouse have really evolved since I joined Inline, but it was truly a team effort.” commented Marcus when asked about Inline’s recent growth.

Prior to warehouse management, Marcus spent the first half of his career in lumber sales.  When asked about the career switch from sales to warehouse management, Marcus responded, “Sales is a great foundation for any career path.  I really enjoyed working with people and learned that taking a genuine interest in your customers as people, and helping to make their jobs easier will bring you far more success, than trying to “sell to them”. I have applied what I learned in sales to my management approach and believe it has helped me build an effective team.”

In December 2019, Due to his positive impact on warehouse operations, Inline felt that Marcus was the best and obvious choice to fill the newly created Purchasing Manager position. When asked how he felt about accepting this new position, he responded, “This position is exactly why I love working at Inline.  Inline is growing, and where there is growth, there is opportunity. I look forward to the opportunity to build relationships with new vendors and secure the highest quality materials for Inline, at the best prices.”

So, what does our new Purchasing Manager do in his free time for fun?  Marcus has four daughters, one of which is a budding Track Star.  Traveling to meets to watch her compete and cheer her on is a priority for him.  “Maybe someday I’ll get back into hunting and fishing for fun, but right now, it’s all about my girls.” Said Marcus.

Please join us in congratulating Marcus on his promotion and wishing him well on his exciting new journey as Purchasing Manager for Inline! 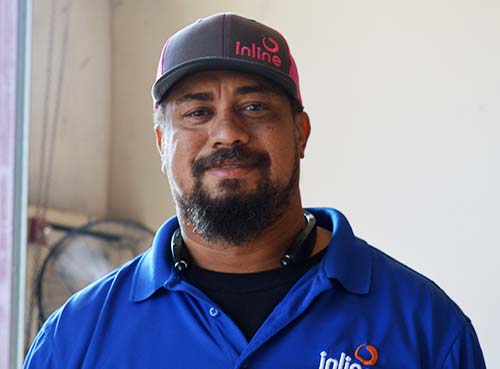